The Libertine is our premium boot offering, designed for rugged all-mountain performance and season after season of all-day comfort. With a burly and supportive flex profile, the Libertine is backed with the slip free performance of the GripLight Outsole with Vibram Icetrek 2.0. The hard charging Libertine Family is the team favorite thanks to the snug feel of the pack out resistant Ultralon F.I.T. Liner. Perfect for rider’s who a supportive, powerful boot for deep landings, high speeds and must make situations.

Our most plush and customizable liner for advanced fit that refuses to pack out. Built with dual density Ultralon Foam for maximum performance and fit longevity, our SkateCuff 3D molded ankle support system and Ultra Footbeds with dual density foam for targeted heel and arch support.

Boots fit true to size and are comfortable.

Best boot out there. Have had several through the years and they're the best boot I've ever had

S
S.A.
Didnt use them yet

I wear eleven size shoe and i ordered an eleven size pair of boot and they fit perfectly, the quality seems very good and the dual boa system make adjusting the boot really easy. I look forward to try them!

I agonised over a new pair of boots this season, and finally landed on the Libertines. I was torn between the hybrid and the full boa (and for anyone wondering -- the double boa has dual zone upper and lower adjustment, and a manual pull-cinch for the ankle harness, where the hybrid has a boa controlled inner harness and trad lacing outside) and eventually went for the boa for the sake of simplicity. I don't know what the other review means with them being tough to get in and out of. The Salomons I just came from are much harder to get on and off. The double boa is easy so long as you loosen the lower and harness a good amount.

Now to the good! These boots are beautiful. They have a really slick look and I've had a bunch of compliments already. They also have a suprisingly low and flat toe box. I had to adjust my binding to strap as these boots were smaller in both length and toe-box height than the Salomons I came from. Which is great as now there's less toe overhang and less drag. The toe box is also really tough and coated in an abrasian-resistant material that protects it from damage when you're resting your edge on it on the lifts. Nifty little design addition!

The sole on these boots is super grippy and tough, too. No slips yet. They're great to walk in as well. The tongue is fairly stiff and wants to sit a little forward, so you do have to crank down pretty hard to get that really stiff feel. I thought they'd be a little stiffer if I'm totally honest, but they're super playful as well as supportive, which means you can mess around with some good flex, but you're also really supported. I think for the all-mountain rider who puts some energy through their boots and board, these are the perfect mixture. And to give even more flex, you can just loosen out the top boa a little, which makes them really playful without losing any ankle hold. I think I would have liked the power strap like the hybrid boots have, just to really lock in against the shin and liner, but that's absolutely not a dealbreaker. These boots are rad.

In terms of forward lean, there's a little, but it feels really natural as a position. I did have to crank my bindings forward one setting from zero, but now they sit super snug. Again, I think Rome have really hit it on the head here for the perfect balance of comfort and response.

Okay, the liner, then. The Ultralon liner was a big selling point for me, and feels really plush and snug when you put them on. It does warm up and get a little more supple through the day, but doesn't pack out while you ride, which is great. It also comes with a pretty good footbed as standard, though I slotted a Foot Doc one in there for some extra arch support! I will say that these boots don't have a huge amount of cushioning, especially in comparision to some freestyle-focused boots, but landings haven't been harsh. You get plenty of impact absorption, but also a super plugged in feel to the board which provides edge and angle awareness like no other boot I've ridden. So there's definitely a reason Rome haven't given this thing oodles of padding. But it's definitely worth it!

The liner secures at the top with two hook and loop pads, which overlap on the tongue and provide a lot of shin cushioning, so you can really lay into those toe-side carves. I would say that to get the best fit with the ankle harness, push the tongue down against the ankle first, then secure the top. There's also a really nice set of J-bars in the liner which are super comfy. I tried on K2s, Ride boots, Burtons, all of which had J-bars that felt stiff and uncomfortable. These are plush but still hold your foot in really tight.

For the ankle harness itself, I did get a little pressure point on day 1 with one of the metal loops, but it disappeared on day 2, so I suspect it's just how I'd put that tongue against my foot! The harness is secured to the shell, and goes over the liner through a loop in the tongue of the shell. Nifty design that works without feeling tight and stiff like the Conda or Str8jkt systems do.

These were all the features I was concerned about when boot shopping, so wanted to lay them all out here for anyone else struggling to make up their mind. I'm super picky and must have tried on a dozen different boots before deciding on these. And I'm really glad I did! I even sized down half a size from my Salomons because these have a roomy toe-box in comparison. And honestly, now, I just feel dialed in, supported, and more confident than ever. I'm laying into turns and hunting side-hits without a second thought. I didn't realise a boot could upgrade your riding like this, but it has.

Thanks, Rome, for a sick boot. Can't wait to score some matching bindings for next season! 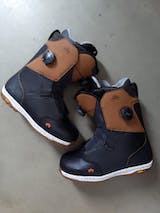